This blog was originally published on The Big Blog website here on Monday 14 July 2014. Below is a slightly edited version of that piece.

Build-it gives young people the opportunity to learn construction skills from professional trade mentors, all working together to rebuild community spaces. Since Build-it launched in March 2013, over 700 young people have been supported through the programme working across 15 sites in Lambeth, south London. Head of Build-it James Alexander describes the difference it can make to the young people involved. 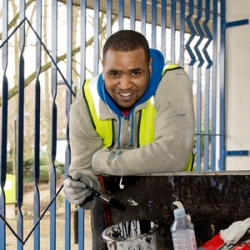 I first met Ralph at HMP Thameside where he was finishing a sentence for armed robbery. Ralph told us how he had learnt plastering while inside and was now ready to get some practical experience and make something of his life. Three days after his release, in November 2013, Ralph began work at a Build-it site at Brixton Green.

Ralph was part of a team turning an old ‘Meals on Wheels’ site into a community space. The conditions onsite were challenging and extremely cold, which led to poor morale and often a lack of mentors. Nevertheless Ralph was always on time.

I remember one particularly busy Thursday last December when a local company offered to send their staff down to help finish painting a building that we were refurbishing through Build-it. I was concerned whether we’d be able to manage the volunteers as one mentor had phoned in sick that day but Ralph came to me and said: “Don’t worry James, I’ve got this.” Ralph then went on to organise all 20 volunteers into various groups, giving each of them roles and responsibilities. The day, which could have been very tricky, was a resounding success, with all participants enjoying the experience and the work being completed! 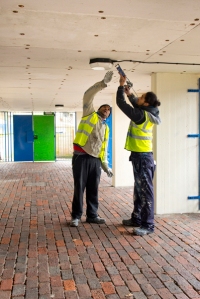 It soon became clear that Ralph was a valuable mentor for many other young participants on Build-it. So in January 2014 Ralph became a paid mentor on the programme. This has come as a result of his commitment to the project and hard work ethic. He is a role model to others and a great example of what can be achieved through volunteering in your local community.

Not every young person will achieve this working on Build-it, but we hope that we will have helped them to prepare for the future. Whether that’s securing a job or moving back into education or just simply knowing more about what they want to do.