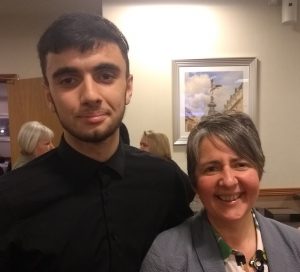 On Thursday 24th of May, we were invited to present at the Public Policy Exchange’s event, Positive for Youth, Positive for Society: The Future of Youth Services.

Tariq from our Dare London Youth Advisory Board spoke about what youth organisations mean to him and about what role they play in encouraging community involvement, social cohesion, and successful transitions to adulthood.

Rosemary Watt-Wyness, our Chief Executive, also spoke. Her message was that policymakers should start by seeing community as young people see it; that young people need a safe and supportive base first and then they can be supported into wider community involvement. Youth policy should be a two way street and the best way to get young people to invest in their community is to start investing in them.

“Hi, I’m Tariq and I’d like to give you my perspective as a young person in a youth club.

For me, youth groups are important for the development of young people. They provide life skills, character development, opportunities, social interaction, support, encouragement and much, much more. Let me tell you just a little bit about my youth group and how that has shaped me into the person I am today.

I attend Reaching Higher which is an organisation based in Croydon. Their aim is to get kids off the streets and get them involved in social activities that benefit the community as well as to this to help their development as people. Croydon is not the best place for some young people. Teens, as we all know, can be especially vulnerable which makes them the most likely to be influenced into doing the wrong things.

I joined Reaching Higher at the age of 12. I joined the club as I needed a secure base after I nearly got robbed. Guess it was just bad luck when I got robbed a couple of weeks later. Nonetheless I felt supported after my youth group helped me and supported me through this period. They acted like my guardians, my parents, and my friends.

My group ran a summer scheme in which they provided activities for teenagers to take part in. When I first joined, I did this summer scheme and at the start I was very quiet. I would happily sit at the very back of the room and found it quite easy to not take part in any of the activities or discussions. This was a period where I really lacked confidence within myself.

After having the almost-experience, and then the real experience of getting robbed, I felt very low. I felt anxious to simply get out of the house on my own with the fear of it happening again. It was a hard process to get back onto my feet.

Nonetheless it was possible. I was able to step outside of my comfort zone and come out of my shell. This is because of the people I have met during the last 5 years. I have met people I would have never thought to see myself being friends with and have built many relationships with people I have come to like. Even if, some of them I had to force myself to like. All jokes aside, I can call these people my family and I wouldn’t change what we have for the world.

One thing about youth groups is that you can’t exactly escape the people you’re with. Some people might see this as a bad thing but in reality it’s a great thing. Schools allow you to do such things where you can just break off from different groups of people if you wish. But in youth groups you are all in it together.

You’re a team the minute you’re in a youth group. It lays foundations as to how you grow; you learn from one another. I was able to learn off my friends and my youth leaders and mentors. These mentors were able to give me the courage and strength I needed to step out of my box and I was inspired, and still am, by their kindness and captivating words.

And now I find myself at school doing the same and helping kids younger than me. These kids get into all sorts of mischief, but I have built a trust whereby they can come to me for help and guidance. I try my best to empathise with these kids, because everyone has a struggle they deal with. Because of our peer relationship, these kids are able to be honest with me and they have the guts to tell me things that establishes a bond that is hard to break. Especially because they know I have no power to tell them off…sadly. But most importantly, I am able to be something that these kids look up to because of the mentors who’ve shaped me into the way I am today.

If I haven’t established the importance of youth groups already, they play a significant role into creating a pathway for teenage life into adulthood, shaping young people into adults that they are happy and confident to be.

Youth groups most certainly play a factor in reducing the amount of youth crime that is going on right at this very moment. Sadiq Khan says he will pledge 15 million pounds a year to reduce youth crime. And yet somehow that’s not enough.

At least 39 million pounds less is being spent on youth groups and organisations each year, which has caused 81 youth groups to close in the last 6 years. That £15 million doesn’t sound as much now, does it? And yet, the outcome of this is it has left thousands of teenagers on the streets and thus be influenced into finding themselves doing wrong things in order to survive. So you now see how even just one youth organisation, let alone 81, has a big impact on teens being diverted onto the wrong track, which can lead to gang violence.

In my youth organisation a person who a few of us knew was killed by the violence that occurs on our streets every single day. The devastation they felt was heart-breaking. But it was at Reaching Higher where they were able to come together as a family to be able to deal with the traumatic grief they were feeling.

If we want to build this community cohesion we will reduce the crime rates going on within London. We want people, who don’t necessarily come from the most privileged backgrounds, to be able to feel like they have a family to lean on and to have the feeling of belonging to a community. When you have such useful resources and facilities that are capable of being able to reduce crime rates and offer support and guidance to those who feel lost, why would you decide to take them away?

It’s simple to get young people involved in communities. Everyone has their own talent, a skill they enjoy themselves doing and a niche that they belong to. Maybe they have found it yet, maybe they haven’t. But regardless of what it is – whether it’s art, football, public speaking, or dance – this hobby they invest themselves into can definitely steer young people away from the negative life choices they might make, thus reducing crime rates in London.

This has to be encouraged by the young people that already attend these places. They must try and motivate as many people as they can to join up, but I think if we can show the tangible effects of taking part in a community it will influence many more people to join. Their character development and the way they shape their life to be is down to them, but this can be enabled if we start looking at the significance of youth groups, and we start realising the important role they play within our community.

Thank you for listening to me today. That was my perspective as a young person in London. I would now like to hand over to Rosemary from London Youth to add her views.”